I’ve been reading more Pat Conroy. I continue to be impressed with his ability to tell the story and to talk about his life and the lives of others entwined with his. Mostly, I treasure and envy his awesome craft of writing, his vocabulary, and how smooth it flows as I read. I have no right to judge the writing of anyone, much less a man with such a gift.

What I feel as I read his words is not so much judging (as in “love it”). It is about me and my experiences, feelings, and thoughts about a man who was born less than one year before I was; who grew up when I did, but under very different circumstances, and who seems to have lived a life that I oddly, but resonantly, relate to in many twisted and indirect ways. Autobiographical fiction; strangely, I get it.

Except for graphics, the following quotes taken from his writings are my notes. Any error is mine. This was me stopping the flow of my reading to write down Pat’s words. Cuz, picture it, me saying “wow” while reading and then grabbing my notebook.

I have been using Public Library e-books lately, so I cannot highlight as with paper books or on my Kindle app. Yet, writing them down in my notebook may be better for increased mental indelibility and the likelihood of my sharing.

I grouped these by category and added my comments. I realize that context is lost by such grab-and-go’s, but I like them. The photos and memes are not my work, except to click “copy as.”

About writing, reading, and writers

“Fear is the major cargo that American writers must stow away when the writing life calls them into its carefully chosen ranks.” (Agree. I do. I must.)

“…nothing is more natural in his (Tolstoy) world than the mysterious and necessary attraction of men and women…their attraction for each other and impending marriage seems part of the design of the Universe, as right as the stars that make up the belt of Orion.” (Pat read War and Peace three times.)

“Teach me how to die.” (This is one of those phrases when I think, “I wonder what he meant?” Context!)

“I want to always be writing the book I was born to write.” (Exactly.)

“But I’m speaking of all the yesterdays that will not come again.” (Old guys say cool shit like that.)

“…that I get to live in the Old New York Book Shop on the night of a book party.” (This was Pat’s idea of heaven after he died. That book store is no longer there, but it was a big deal to him. Do you have a place like that? A memory so profound and pleasurable that it would do for a permanent state in an afterlife?)

“Nothing is more difficult to overcome than a childhood of privilege….” (Or abusive parents.)

“My childhood taught me everything I needed to know about the dangers of love….” (I intend to use this when I write more on the paradox of love.)

“We got some things right.” (About writing, the publishing writing world, and himself.)

Regarding Norman Berg, Pat’s friend and book rep., “He was a hard man who dismissed fools without conscience or regret…. He was an easy man to dismiss, and a hard one to love.”

“Know everything. Feel everything. That’s your job as a writer.” (Said Norman Berg to Pat, quoted by Pat.)

“The tribe is contentious, the breed dangerous.” (Regards writers and why he claimed to have few friends among them. Pat Conroy had many friends, and many of them were writers. I don’t really know enough writers to have an opinion, but the ones I know, while seemingly neither contentious or dangerous; most are unapologetically opinionated. Norm Berg’s job description?)

“The world of writers was a snake hole, a circle of hell – a rat’s nest and a whirlpool and a dilemma – not just a world.” (Pat was opinionated. I wonder how he felt about French writers? See is time in Paris, below.)

“Two pillars of authority, patriarchal influences shaped my childhood. Dad and the Catholic Church. Punishment of anarchy. Contempt for anyone different.” (Mine, too.)

“There was an amazingly limitless capacity for ruthlessness at the heart of the family of man.” (Regards all of life, but learned from the plebe system. This is from The Lords of Discipline.)

“What will this make of me? A man, or a monster?” (Regards surviving his freshman year in college)

“A prize that exacted an awesome tithe of spirit from those who loved it.” (The Lords of Discipline)

“It was sublimation and surrender to the efficacy of denial.” (Pat had something specific in mind, but I can apply this to so many times in my life.)

“The history we are born into always seems natural when we are young, but it seems misshapen and grotesque as the winter years come upon us.” (I have had similar thoughts, but my experiences were a little less profound.)

New words for me

Three of many words I learned and liked reading Conroy: décolletage, oleaginous, and unctuous. (I am smiling and could go on and on and…)

His time in Paris

“France is the only country in the world where friendliness is one of the seven deadly sins.”

(To be fair, Pat loved his time in France and cherished the memories. But why deny the French acting so “frenchly”?) 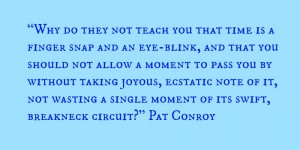 In our reading life, we must look both ways.
In writing, mind the damn gaps.