When I was a very young lad, one day as I was walking along a well-worn path, I noticed a stone of interesting size and shape. The stone briefly entered my short span of attention, as did many things lying about my undiscovered world at that age. I don’t recall many other details about my surroundings that day, but they no longer matter. 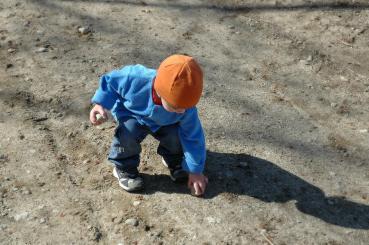 That was the first time a stone was not just another rock lying among other random bits of littered scree. Certainly, similar discoveries have occurred thousands of times throughout my life while walking, running, hiking, exploring, or just hanging out (thinking or not). This was a simple event that works as my metaphor for many other life events involving discovery, reason, and doing.

The rock was just lying there among others, perhaps for a thousand years or more. I wasn’t yet thinking in geological or historical terms. Stones have served many purposes after they were formed millions, perhaps billions, of years ago. There it was on the ground with others just where my eye located it. It had probably been moved around in one fashion or another over the centuries. I had no way of knowing, nor did I care. Even before approaching it, I was mentally making my I saw it first claim.

Living organic things come and go. Almost all life forms have appeared for a time and then were gone. Over 99 percent of life is extinct. Some rocks may contain fossilized records of past lives, but most are just inorganic minerals. I was not the only child who saw rocks, sticks, or other items as things naturally intended to be thrown about. Getting the right rock and throwing it brings a feeling of success. Skipping rocks on water is a universal rite of passage.

Looking around at the organic things today, I realize that most are less than 100 years old, and less than 50 in current forms. The complexities of the laws of thermodynamics (physics) change things, but we only see the now.

Neither I nor the stone said anything, Rocks don’t talk or hear in the animal sense. But nature can speak to us through both organic living things and through inanimate objects, such as rocks and fossils.

As I moved, the rock played its role as a lifeless stone like billions of similar objects covering the surface of the Earth. Rocks are infinitely expert at going with the flow. River rocks spend so much time tumbling in the roll of water they lose their edge and become rounded. The rock I saw did not sparkle, twinkle, or do anything spectacular. But I saw it. I squatted and half bent over so I could pick it up with my hand. That was many years ago.

More recently, I picked up another rock – my first in years. I carefully examined it, top, bottom, and all sides. One learns that by picking things up, especially rocks, one must carefully examine the item to ensure it is a lone stone, and not one littered with objectionable attachments. It must be just the boy, or now the man, an old man, and the rock with no another surprises.

While I didn’t bother to analyze it, the rock was local Austin limestone, or chalk rock, which is said to have formed in the window of 100 to 200-million years ago. It didn’t matter, and at the time, what I was looking at was just an old rock. Or was it?

Ideas are like stones. Once you pick one up, you must examine it, and only then decide what to do with it. As with stones, I have dropped ideas, put them in my pocket for later pondering, or threw them. When throwing ideas or stones, one must distinguish between discarding, sharing, or targeting. The first is simply throwing it away or back to where it came from. The second is communing by tossing it to someone else. But the third is capturing the idea or stone for our own creative purposes. Like rocks, ideas can speak to us. We just need to listen.

Look both ways for material and ideas. That’s what creativity is all about.
Toss some back to the gods, share some with others, or use them within your own art.
Mind the gaps. Look there for those hidden gems. 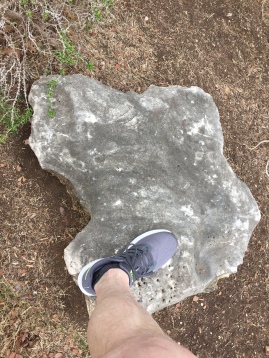 4 thoughts on “Essay: Rocks Can Speak”