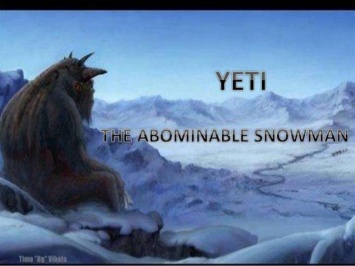 Yeti is a company in Austin that angered the NRA. They make coolers and specialized drink cups. Supporters of the gun lobby are taking their Yeti coolers out to the boonies and literally blowing them up (and recording the deed). Turns out it was a misunderstanding, but this is the NRA. Boom! Oops, too late. See it by clicking here. And I am writing about weird behavior by mythological creatures. Oh, well.

In the folklore of Nepal, the Yeti, AKA the Abominable Snowman, is a tall ape-like creature said to inhabit the Himalayan region of Nepal, Bhutan, and Tibet. This dude could be confused with Big Foot, or Sasquatch, which is a North American (primarily Pacific Northwest, Washington State or BC, Canada). While they’re not the same, there are similarities (big hairy ape-like). In neither case, has anyone ever produced an example or had one over for pizza and some beers.

Most folks regard the Yeti as a legend for lack of evidence indicating its existence. As with so many things, existence could be proven, but non-existence cannot. Safe to be Yeti (or Big Foot) agnostic. However, here is proof of Sasquatch: I spotted him at the Issaquah Coffee Shop sipping a latte and meeting his neighbors.

Abominable Snowman was coined as a name in 1921, when Charles Howard-Bury led a British expedition that he chronicled in Mount Everest The Reconnaissance. In the book, Howard-Bury accounts crossing an area at 21,000 feet (6,400 meters) where he found footprints that (according to him) “were probably caused by a large ‘loping’ grey wolf, which in the soft snow formed double tracks rather like a those of a bare-footed man”. He added that Sherpa guides volunteered the tracks must be The Wild Man of the Snows.

Maybe they’re cousins or something.

Look both ways for Yeti or Sasquatch and take a photo so we can prove the affirmative. But mind the gaps, particularly crossing the Himalayas at 21,000 feet without oxygen.

4 thoughts on “A2Z Challenge: Y is for Yeti”