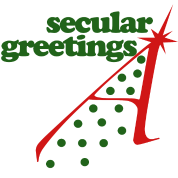 Since this is my first December and holiday season as an admitted atheist, it seems fitting to discuss Christmas from my nonbeliever perspective.

Much has been said and written about the secularism surrounding the holidays, and I’ve decided to provide my personal perspective. This is my 70th time partaking of the Christmas season celebration. So, much of what I say and do has precedence in that it’s what I’ve been doing for years.

As I write this I’m hearing the news from Germany of a large truck being driven into a crowd of people celebrating the holidays and the Russian Ambassador to Turkey being assassinated. The majority opinion seems to be that both events may be related to terrorism and religion, or at least god politics of some kind. And the list of such deeds goes on. None of this is in the holiday spirit. But as Christopher Hitchens subtitled and wrote in his book, “Religion poisons everything.”

“Tantum religio potuit suadere malorum.” (To such heights of evil are men driven by religion) ~ Lucretius

For years, this was the season when we tried to spend quality time with family. Beginning with Thanksgiving, it’s a busy travel season in America as families reunite for celebrations. We’re surrounded by hype. But I enjoy the hype more than I like to admit.

I look forward to Halloween each year, partly because it marks the start of this season. Christmas is a happy time, a great time for most children. There are football playoffs, and bowl games. Winter begins, Yule is celebrated, and I like to look at snow. Dealing with it sucks.

In the home of my birth, the smell of the house changed, mostly due to the tree. But the house would also take on the aroma of whatever adult beverage had been opened. Aunt Lorry, who seldom drank alcohol, always brought port wine. Port is some powerful vino.

The thrill of gifts and happy people occupied our thoughts. We went to church. A little hut was built in the yard next to the church with a nativity scene inside it, behind thick glass and a locked door. There was a slot to deposit money for the poor, until someone started to rob it. Then they stopped using the box, and eventually the little hut went away. They must have assumed the thief was not one of the poor.

I don’t recall going to midnight Mass as a kid, but I probably did once or twice. Years later, I went several times. It was always crowded. All those Catholics who only went to Mass on Christmas and Easter would show up. By then, there was only one Mass on Christmas Day — all the others were vigil Masses on Christmas Eve. Going to church on Christmas day was inconvenient, at best.

Christmas was a “holy day of obligation” which meant that if you did not go to Mass that day, you would burn for eternity unless you made it to confession. I’m oversimplifying, but I was a child back then.

Some Christian denominations don’t celebrate Christmas at all. And for non-Christians, it’s not celebrated as anything more than a secular holiday. But Christian or not, no one in the USA escapes the hype of Christmas. I provide gifts and greetings appropriate to this time of year and the holiday. I helped to decorate a big tree and to put up other decorations this year. I went to our party and may have sung some Christmas songs.

I fully understand the religious aspect of the holiday season (be it Christian, Pagan, Jewish [Hanukkah], or others). While I don’t agree with any religion, I think the intended spirit of caring is good. For me, family, friends, caring, giving, and delighting in nature are all the good things. So, like many atheists and other non-Christians, I join the party as I have for almost ¾ of a century.

I’ll continue to celebrate the season much as I always have: eating and drinking too much while overdosing on football. It’s a fun cultural and secular holiday with many features that benefit life, whether one believes in any god or not.

I don’t see my enjoying the holidays as a big deal any more than I do saying “bless you” when someone sneezes, or “God damn it” when things go wrong, or when I use the word “god” or “Jesus Christ” to express pain or anger. But cussing is another story for a different blog. Unfortunately, the holiday season is a stressful or bad time for some people.

If it busts someone’s chops that atheists enjoy the holidays, that’s a bummer. We intend no harm by joining the festivities. I suggest those humbugs pass a law that says one must be Christian to enjoy the holidays. Until then, you’ll find me hangin’ ’round the mistletoe.

I suggest you try Joey’s take on this by clicking here.

Happy Holidays.
May there be peace, love, and a thousand sugar plumb fairies dancing in your heart.
Look both ways and mind the gap.

12 thoughts on “Atheist Perspective on Christmas”