Follow Our Literary Journey on WordPress.com
Join 1,094 other subscribers

I’m comfortable with not understanding everything and everybody. It has little to do with what I want, but more to do with my level of acceptance. I can be curious, and sometimes I’d like to know more. But I’ll never know everything.

Here’s an example. About a year ago I was in a discussion group talking about the US Government, and the government of another country that many of us consider an enemy. One lady said, “All I want is to know the truth.”

I watched her to be sure she was serious. Then asked, “The truth about what?” Following her tongue-tied response, I asked why she thought she could learn the truth. I explained that we had all the information available, filtered by the providing media source. Her problem was, and ours is that we usually form opinions and make decisions without knowing the facts. She said, “Well, that’s interesting.”

The first time that I recall anyone calling me an enigma was back in the mid-1980s. I was walking back to my office when one of my staff looked at the contents of my hands he said, “You’re an enigma.” I looked down at my hands, smiled at him, and asked why. “A Snickers candy bar and a Diet Pepsi. That makes no sense.” I hadn’t considered the conflict of the combo. I answered, “It does to me. I like them both. If I was interested in diet, it would be celery sticks and a glass of water.”

If I ask you to explain what I see as a puzzling conflict in your behavior or opinions, and you do, are you still an enigma? Or is it my failure to understand the makes you an enigma?

The enigma phenomenon pronouncement is an outside view. The inside view usually makes perfect sense. Furthermore, if people change behavior or opinion, are they still enigmatic?

I am an enigma to many. Here’s why.

I spent over 45 years working in the Department of Defense (military, contractor, and civil service). I graduated from the most conservative (by most measures) public university in the country. I’m an old white guy who lived in Texas most of my life, and most of my long term acquaintances are conservative, republican, and religious. Stereotype me based on that and you’ll get me wrong, as many do.

Politically, I’m a left of center moderate democrat. Depending on the issue, I’m often liberal, but I often find myself defending traditional things. I am fairly disciplined, but a good and flexible listener. I am an atheist who spent too many years trying to be that church guy. My past, age, race, education, and former residence belie the real me.

Love and peace are the answers. We should do all we can to avoid wars. After that, I think the limited, partial measures war-like actions of the past were folly. War should be fought to win. Because war is so ugly, that goal is only reasonable after all peaceful measures have failed. Talking war is a murky swamp full of traps. But I think we need to apply logic to our policies so that we can stop being on the losing end.

I’m neutral regarding the term open minded. I prefer a willingness to hear some other points of view, to be accepting of what I can, but to hold to my beliefs until information changes my mind.

I’ve done a lot, seen a lot, and lived a lot; but I can still be perplexed about myself. So, if you’re confused, maybe you should be. My wheels turn slower than they used to, but they’ve not stopped. 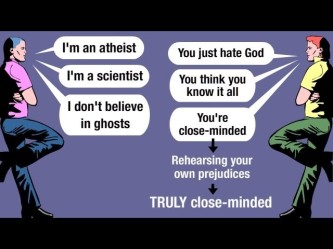 To keep an open mind, look both ways.

5 thoughts on “Are You an Enigma?”