I'm a pluviophile who loves rainy days, writes for pleasure, and lives and writes north of Austin, Texas. I enjoy the intrigue, mystery, and confusion of our human nature. I'm happy enough. I enjoy life, appreciate nature, and I experience both the awe and wonder of it all. I am an enigmatic outgoing introvert by nature and a skeptic by reason. I request a good pizza and fine adult beverage for my last meal. Join me on this journey of poems and essays, with occasional fictional fib. 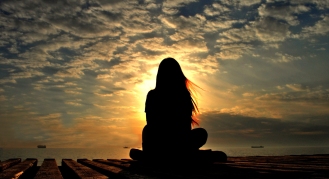 If I’m your guest for dinner and your family tradition is to hold hands or bow your heads to pray, or we’re at a restaurant, and you want to pray; I’ll respectfully observe your tradition. I don’t say grace nor will I ask your God to ‘bless the meal;’ however, I’ll not be disrespectful. If you’re my guest, you may expect the same courtesy. I don’t pray, but if you do, it’s ok.

In Catholic grade school, we recited Grace Before Meals before lunch, and Grace After Meals when we returned. I don’t recall saying it with my family. As an adult, I said the short prayer you can see on virtually any episode of Blue Bloods. If you take too long and the food gets cold, I may pray for an end to your jabbering.

I consider some, perhaps most, prayer to be harmless and it maybe even good for you. That’s right. I said some or most. Openly expressing gratitude, which is perhaps the least felt of all human emotions, should be a good thing. But, in my opinion, not always.

Thanking God for the touchdown is silly. So is divine gratitude for a political candidate winning or for scoring in the lottery. These examples are nonsensically selfish and may be harmful. While I’m good with being grateful, I’m not okay with all forms of prayer. I shouldn’t care, but I’ve long held my opinion.

I’m fine with prayers of worship like God is Good, but if I hear God is Great yelled in Arabic, fight or flight may take over. Back as far as I can remember, I had issues with asking God for anything. It made no sense to me — still doesn’t.

My parents told me that God helps those who helps themselves, or a similar form of the phrase. I’ve never given up on the basis for that idea. For example, I went to see a house being remodeled and found the painter sleeping. After inquiring about his health, I asked if he worried about being fired. He said, “The good Lord will provide.” Raising eye brows, I said, “Oh. I see.” Lucky him. I wasn’t the owner.

As often happens following severe droughts in South Texas, the many weather gods provided too much rain. Severe damaging floods came after the months of virtually no rain. As Father Conor McGrath was reading announcements from the Parish Bulletin in his wonderful Irish brogue, he adlibbed a joke by saying, “And would the gentleman who is still praying for rain please stop.”

Another time McGrath told us the joke about the man named Thomas, who continuously prayed to win the lottery and began to lose his faith. The gambler blamed God’s failure to grant the prayer as promised. I can still hear Father Conor deliver the punch line from God, “Thomas, I need a wee bit of help here. You’re needin’ ta buy a ticket first.” We must do our part.

Valerie Tarico made some good points in her post about why some prayer is neither valuable nor innocuous. It encouraged me to make my own case.

She said, “Atheists, agnostics and other secular activists may think prayer is hogwash, but a lot of other people like praying and they like to think that it works. So, why not just leave the habit alone? It seems harmless enough.”

Later, after she highlights some of the perks of prayer, she presents her case against the troubling hidden costs of petitionary prayer. This is her list of 7 problems, with comments that are mostly mine.

As I’ve implied, some types of prayer, like contemplative meditation, gratitude, and communing with something greater than ourselves, may be useful even for non-believers. But, Valerie Tarico said it best.

“It’s time to get off of our knees and take care of ourselves and the people around us. We’ve long passed the infancy and adolescence of our species. Regressive fantasies can be delightful, but at some point, clutching a teddy bear and squeezing our eyes shut and lisping “Now I lay me down to sleep” ceases to be sweet. The world needs adults who, in Sweeney’s words, are willing to get up in the morning and mind the store.”

May we all live in the real world and acknowledge that we need each other more than invisible fantasies born from the minds of men.
Mind the gaps, the store, and look both ways.